First, a bit of history. In 1993, an adventure game with unparalleled graphics was released for MacOS. That game is Myst. I'm not sure when it came to PC, but that was when I first purchased it. I played it, and I loved it.

You walked around these realistic, fantastical worlds solving puzzles, and unlocking the story of what Myst was, and why you were there. Your main guide was Atrus, a mysterious man trapped in the ruins of an ancient city called D'ni (pronounced Dunny). He was projected in state-of-the-art FMV. For the uninitiated, this is usually what we call it when we mean real actors filmed on real cameras and put into a game. In Myst and future installments, the actors would be standing right there in the room, talking to you. It was like you were in a movie! 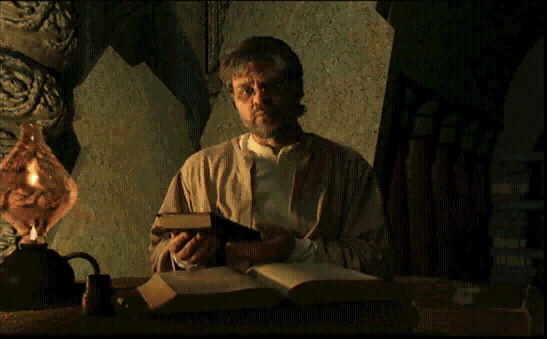 Atrus was played by Rand Miller, one of the lead creators of the game, along with his brother Robyn. His other brother, Ryan, co-wrote the novels.

And oh, yes. The game had novels. Three of them! But I may be getting ahead of myself. By the time you finish Myst, you find that the universe is much larger than the few islands on which you solve puzzles. The second game came along, Riven, greatly expanding upon the lore. Returning to my story, I was so enamored with the wonder of Myst, that Riven was a must-purchase on its release. I spent many hours trying to solve the mysteries of that world.

In the meantime, I'd also purchased the novels. The stories within their pages expanded those games from merely jpegs and quicktime movies to living, breathing worlds. By the time I was done, I wanted to create my own worlds using the ancient arts detailed in the story. Teenage Ronnie spent many hours reading these intriguing books and fantasizing about being part of that boundless universe.

Fast-forward to 2016. A new game is released, Obduction - a game in the style of the original Myst. I was excited to try this new project, as my interest in the lore of of the universe had waned by the end of Myst III.

Obduction was an absolute delight, and truly felt like the original creative spark that birthed Myst. They even continued to rock the FMV, and once again, Rand Miller was a live action actor in his game! (Among other characters, of course.) Decades later, Rand's face again looked at me from the other side of my monitor. It was a love letter to their own work. They could have done it entirely in CG. There were even some CG characters in the game, but I am immensely glad of their decisions to use FMV where possible.

Now, fast forward once again to March 2017. Ronnie attends PAX East. It's Sunday, his feet hurt, and he barely treks to the Expo floor anymore, because he knows the chair economy is scarce. He then stops talking in third-person because this will become a difficult story to tell, otherwise.

As my sore footsies drag me slowly around the Indie Megabooth, (I was looking for a game called Ronnie because I'm a narcissist) my eyes caught a glimpse of the Obduction logo.

Here, a million sparks flashed in my mind in the span of about 3 seconds, and I will attempt to sort the most prominent ones for you.

Spark 2: "Wait, that's the game from the Myst creators."

The game had already been out for a while, but they were showing off the VR. As my gaze tried its best to burn a hole in Rand Miller's head, a woman who was standing in line for the VR demo reached into her bag and pulled out 3 books. The books of Atrus, Ti'Ana and D'ni - the three novels of Myst lore whose pages teenage Ronnie had worn out from so much turning.

Rand disappeared with the books, and returned with them shortly, having signed the books for the waiting fan. I turned to another nearby woman and, with wide eyes, I said to her, "This man is my childhood." She responded, "I know!"

The aching in my feet dragged me back to consciousness, but I couldn't NOT stand in line for the VR demo. I hadn't much interest in VR and had already beaten the game, but wanted a reason to talk to Rand.

Cut to about 20 minutes later, and the line had moved close enough where I was able to engage the game creator in conversation. I explained to him everything I've told you here, and he was nothing if not the friendly older man who adores talking to people and knows how to keep a conversation going.

I had a question for him which requires some setup, so bear with me.

I was recently watching an Adam Savage video from Tested.com in which he describes how he was commissioned to build a physical version of a special knife that appeared in Riven. I always called it "Gehn's knife" (the antagonist of Riven) but I don't think that's accurate. 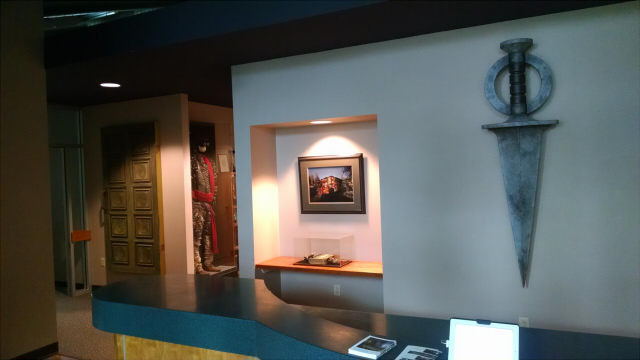 I asked Rand about this knife, and he lit up, like I was the first person to ask him about it (he's probably just really good at making you feel that way!)

He explained to me that, back when they were working on Riven, they had sourced some work out to a company in California. They had a scene in which a giant knife would fall into a fissure, but weren't sure if their CGI guy could handle it. In the end, they didn't use the knife for the game, but instead mounted it as a welcoming prop that still hangs in the front of their office.

It wasn't until they watched the same Tested.com video that they discovered it was Adam Savage who had built it! It was their prized possession with surprisingly regal origin. Rand lightly lamented not having taken better care of it.

When Rand watched the video, he asked his associate who the associate talked to about building the knife. (I want to say the associate was Mark, but if anyone knows, please correct me!) Mark checked his phone contacts and said, "I always talked to some guy named... Jamie."

Not only was an older, accomplished man of extremely noble history telling me this wonderful story, he was guiding my hand to lock in the last piece of that puzzle, as though I were playing one of their adventure games entwined within the very fabric of my life.

After the glow of this conversation began to fade, he told me I should try the VR, despite already having beaten the game. I agreed, but when no one was looking, I slipped away. I felt bad about that, but the pain in my feet was too intense, and I had to find a place to sit.

Human lives are comprised of chapters, but chapter 1 does not always end when chapter 2 begins. For me, this was the chapter of Myst. It began as I stared at the PC CD-ROM in my hand as my mom drove me home, and the chapter ended when Atrus himself smiled at me and told me tales from the past. Many chapters opened and closed while that chapter was open. Many more will open and close, but this is one of those chapters that makes you tell your friends, "I have to tell you about my book."

Thank you for reading this bit of mine. 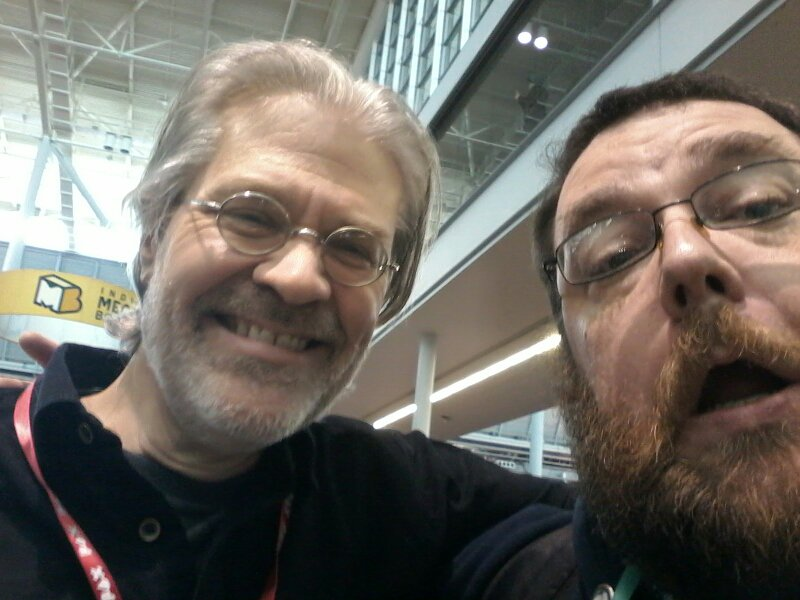